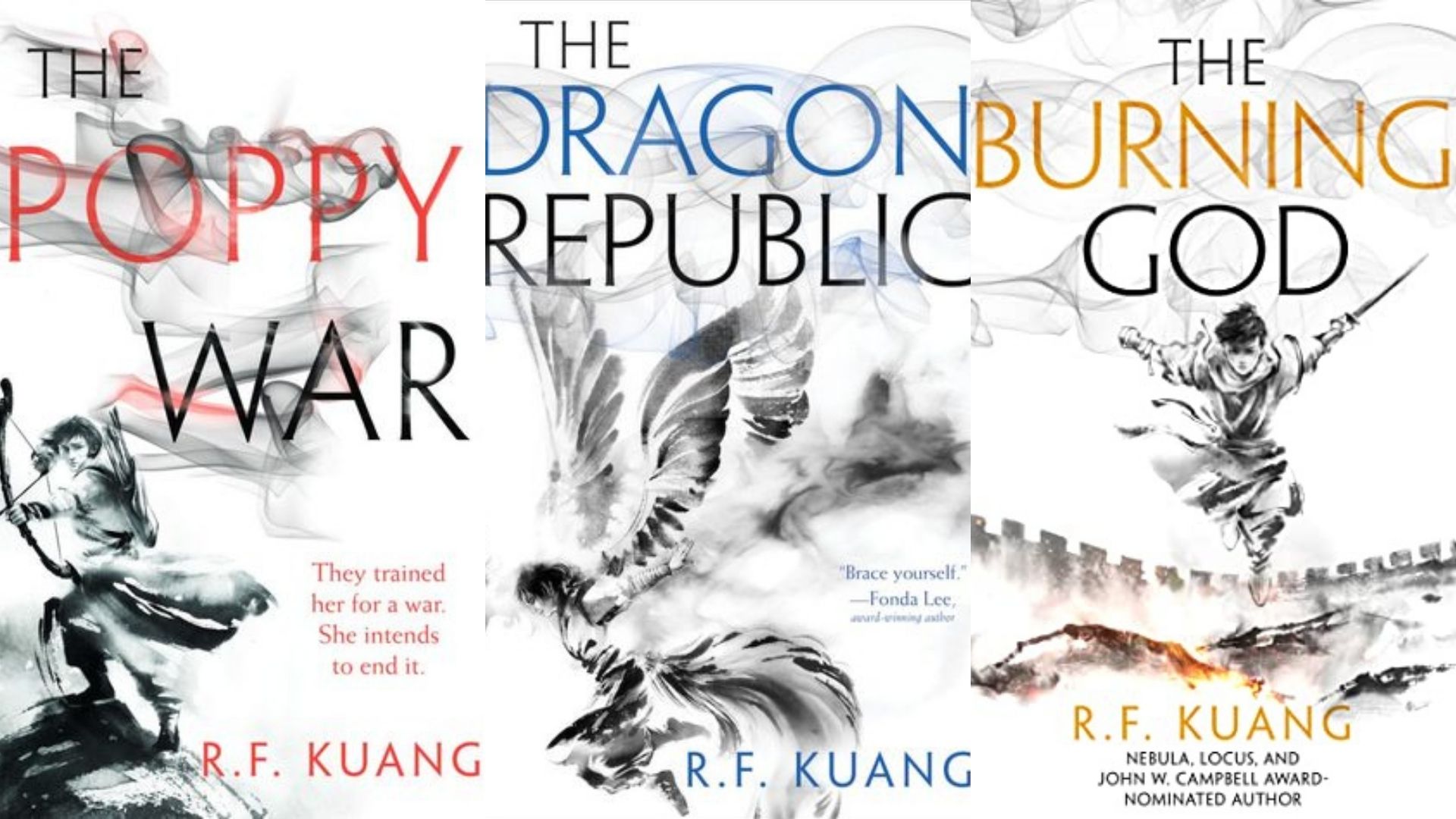 I have to admit, my copy of The Poppy War by the brilliant R. F. Kuang had been sat on my TBR pile for a while. Part of my hesitation was the subject matter. Despite being constantly mislabelled as a Young Adult Fantasy, The Poppy War is most definitely NOT a YA novel. It’s a deeply disturbing grimdark story of war and suffering that takes inspiration from real life atrocities during the wars of 20th century China. It’s not a story for the faint of heart, but it is a story which deserves to be heard – and is wonderfully told – as it explores the themes of war, poverty, inequality, colonialization, culture clashes between the west and the east, and also the wonder of the gods. It is a fantasy, after all, and there is magic aplenty!

The Poppy War trilogy recently concluded with the third and final book, The Burning God, and so I wanted to go over my thoughts and feelings of this world and its characters that hooked me from page one and wouldn’t let go. I’m saddened that I waited so long to read these books but I did burn through them – pun intended!

The Poppy War begins with Rin, a feisty young woman who chooses to enter a military school instead of face life married to a creep. She works herself to the bone to earn a place in the Sinegard Academy, where she befriends sweet nerd boy Kitay but also makes fierce rivals including pretty boy Nezha, who comes from the rich Yin House of dragon warlords, the opposite to Rin’s own life in the poor Rooster province. Entering the Academy was the easy part, however, as Rin must train hard to earn her place among the elite students. This first half of The Poppy War is where it is often mistaken as a YA fantasy since it focusses on Rin’s life and relationships within the Academy – her classes, her battles, and the wonderful student/mentor relationship she develops with the Lore Master, Jiang. It is through Jiang’s training that Rin first learns to connect with the pantheon of the gods and the tantalising powers that they offer.

As you’d expect from a grimdark fantasy based on war, the story soon switches tone from the almost whimsical adventures of school life to the realities of war. The students are forced to grow up quick and either sink or swim as war reaches their Academy. During one such battle, Rin discovers she can call upon the Phoenix god and use its power to summon devastating fire magic. This then earns her an involuntary place with the Cike, an odd-ball group of shamans who can all commune and summon their gods for their earth-shattering magic.

The Poppy War is however more than just war and supernatural powers. Rin finds herself under the command of the charismatic and compelling Altan, and it’s their love/hate relationship which drives them both through war and to hell itself. Rin’s relationships with her former Sinegard friends also evolves over the course of the story as their old rivalries suddenly lose meaning in the face of war. There are many scenes throughout this book which delve deep into the graphic realities of war, both during the battles and the harsh aftermath. Rin and Altan are pulled through awful and impossible decisions which lead to horrific consequences and a truly shocking end.

The second book, The Dragon Republic, builds on these consequences by attempting to create a better world over the ashes left behind. But instead of uniting the world under a republic, there just seems to be worse warlords and more war. Here, Rin is forced to fight alongside enemies and form deeper connections with the Sinegard students she once despised, including the misunderstood Nezha. Of the three books, I’d say that The Dragon Republic was my absolute favourite. Whilst it didn’t feature the explosive devastation of the first book, there were plenty of twists and and betrayals which hurt just as much. I loved how the second book also introduced more of Rin’s world and the enemies of the west, as well as deepen the relationship between Rin and her best friend Kitay. There isn’t much in the way of traditional romance in this series, but the platonic friendship between Rin and Kitay is one of my favourites from any fantasy series.

The third book then, The Burning God, is where Rin finally takes control of her own destiny and powers, though it’s Rin we’re talking about here, and her fiery temperament means she doesn’t always play nice. Well, she rarely plays nice! Without spoilers, I’ll say that the final book wraps up the series nicely, bringing back one of my favourite characters from book one, and it ends in the only way I’d expected it to end; with more devastation.

I thoroughly enjoyed my time in this bleak world, though I’ll admit it got too depressing at times even for me. Rin is a headstrong character who burns her way through the entire series, and as a result, The Poppy War is fast paced, brutal, and doesn’t hold back or shy from difficult topics, much like Rin herself. The world building is based on 20th century China and covers topics ranging from the opium trade and addiction to the alienated feeling of outsiders coming to colonise and steal culture.

One thing I especially loved in this series was the writing style and dialogue between the characters. There’s a lot of modern dialogue and swearing here, and whilst some may find this doesn’t reflect the setting, I loved it. It brought the characters to life, made the writing punching, and also added much needed laughs – thank you Kitay and Jiang!

I’d happily read anything R. F. Kuang writes, and here’s some good news – The Poppy War is being adapted for TV! I honestly can’t wait to see this world come to life, even if I know certain scenes will kill me. Now that the trilogy is complete, this is your chance to discover this amazing grimdark fantasy for yourself. Just bear in mind there’s a lot of content warnings. This book is NOT for kids!