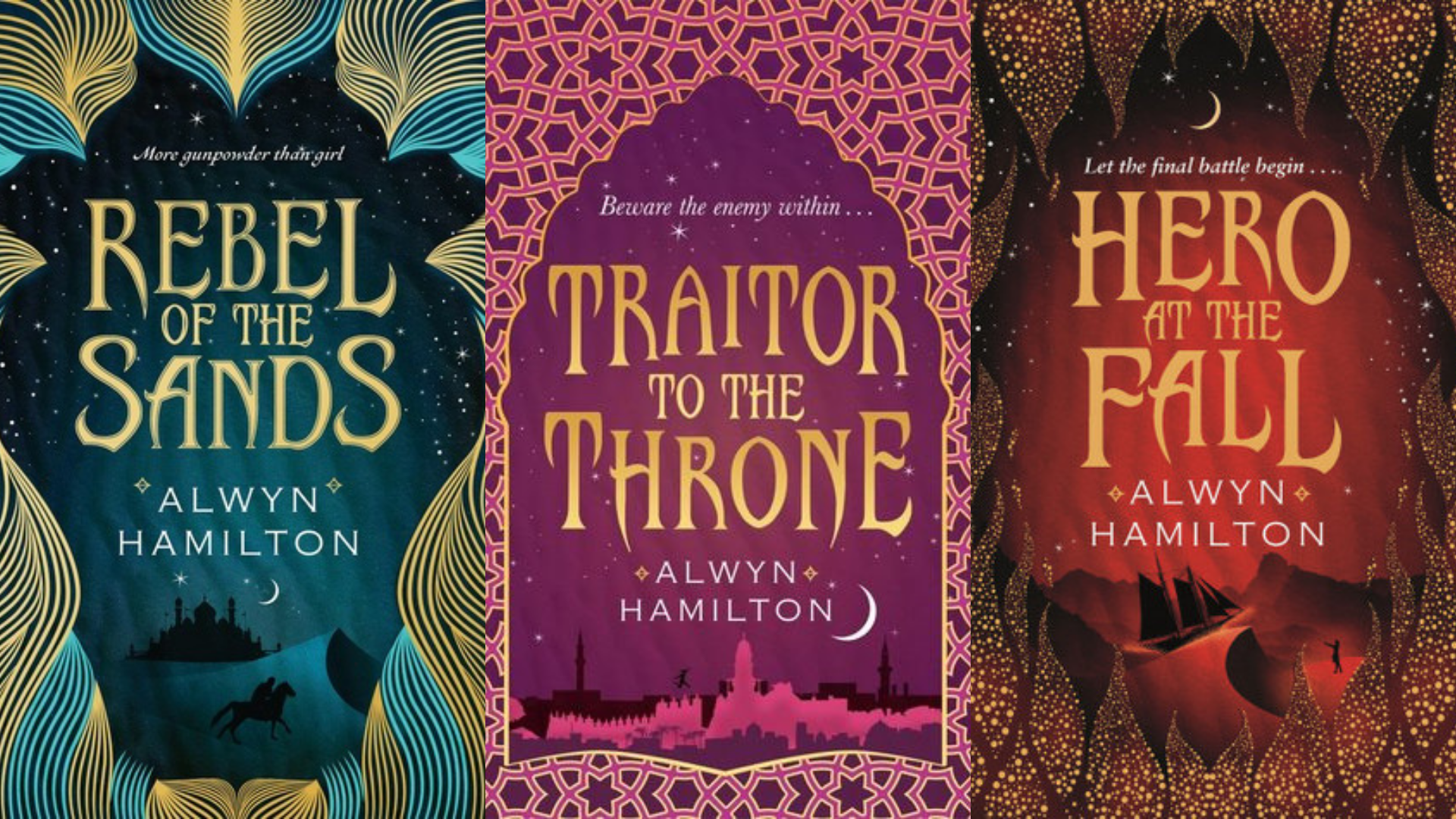 I’m a big fan of Alwyn Hamilton’s Rebel of the Sands trilogy. She recently announced a whole new series in the works, starting with The Notorious Virtues coming in May 2020 which is set within the same universe as Rebel of the Sands, albeit on a different continent and generation. Reading the news got me all excited and reminded me that I have yet to gush about some of my favourite YA fantasy books

I read Rebel of the Sands a while ago because it ticked all of my favourite YA fantasy tropes; a strong ass-kicking protagonist who disguises herself as a boy, a rag-tag group of friends, an adventure across a perilous desert, a rebellion against impossible olds, and a romance which didn’t feature a love triangle or a forced love interest. This story avoided most YA clichés and was refreshing. The setting was a unique mix of middle eastern inspired djinn magic crossed with the gun-slinging action of the wild west.

Also the UK edition covers of this trilogy are absolutely gorgeous

The story begins with Amani, a girl known secretly as the Blue Eyed Bandit due to her skilled reputation with a gun and her unique blue eyes. Forced with the prospect of an arranged marriage, Amani leaves town with a foreign stranger called Jin and together they blaze a trail across the desert which leads to joining a rebellion against the Sultan and his sons. Whilst I loved the build up to Rebel of the Sands, I did feel like the story was too short and ended just as things were really starting to heat up – literally. Amani discovers a few amazing secrets about herself through this journey, and whilst I don’t want to spoil it, she does possess one of the coolest powers I’ve ever read in YA fantasy; the power to control the sands themselves and turn the desert into a weapon.

Whilst the first book was too short for me, Traitor to the Throne was my favourite of the trilogy and certainly didn’t leave me hanging in the same way!

The story to the second book picks up with Amani getting captured during a mission gone wrong and awakening within the Sultan’s palace as his captive. Unable to use her powers here, she chooses to use this opportunity to spy on the Sultan within his harem. It sounded like this would be a slower paced story compared to the first book. There’s less gun-slinging action, however we’re introduced to a lot more world building, drama, intrigue, and some truly fascinating characters. We also get to meet the big bad Sultan himself, and surprise! He’s quite charming. I absolutely adore books where the bad guy is someone who I could see myself agreeing with and who questions my own beliefs.

Traitor to the Throne throws in a lot more political-manoeuvring without being dull. There are more twists and turns, and the climatic ending left me absolutely breathless and desperate for more.

Waiting for the third and final book, Hero at the Fall, was definitely painful, but luckily you can read all there of these books together and skip the wait! I was so excited to see how this trilogy would end and Alwyn Hamilton did not disappoint me.

Free from the Sultan’s clutches, Amani is tasked with leading the rebellion and she realises that she sucks at it. She does her best, bless her, but ends up bouncing from one catastrophe to another. I’m glad that the author explored Amani’s weaker side and the pressures that come with being a leader. Amani doesn’t magically become the hero, but instead learns to work with her limitations alongside her friends strengths.

The final book has its fair share of tragic deaths, twists and turns. All in all, I felt like it was a fitting end to the series which wrapped up everything up nicely. And I have to say I LOVED the epilogue which followed which is now my favourite style of epilogue in books and the standard to which I will judge all future books.

If you love YA fantasy (of course you do!) and want something a bit different, then I definitely recommend picking up the Rebel of the Sands trilogy. There’s also a series of short stories called Tales from Sand & Sea which I’ve sadly yet to get my hands on so do let me know if you’ve read them and what you think. Don’t forget you can now pre-order Alwyn Hamilton’s new series and add it to Goodreads. Get to it!