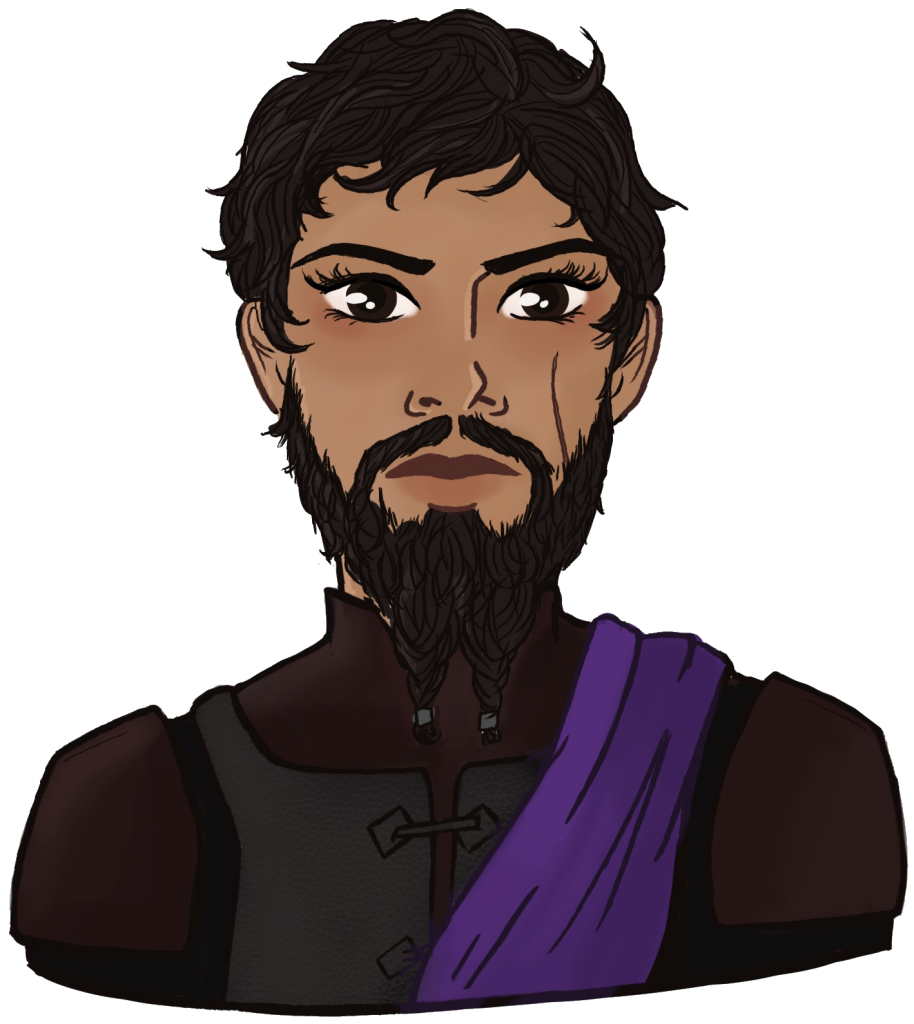 “What challenges have you faced? What battles have you fought? What right do you have to stand among those men?”
Jonan Arlbond 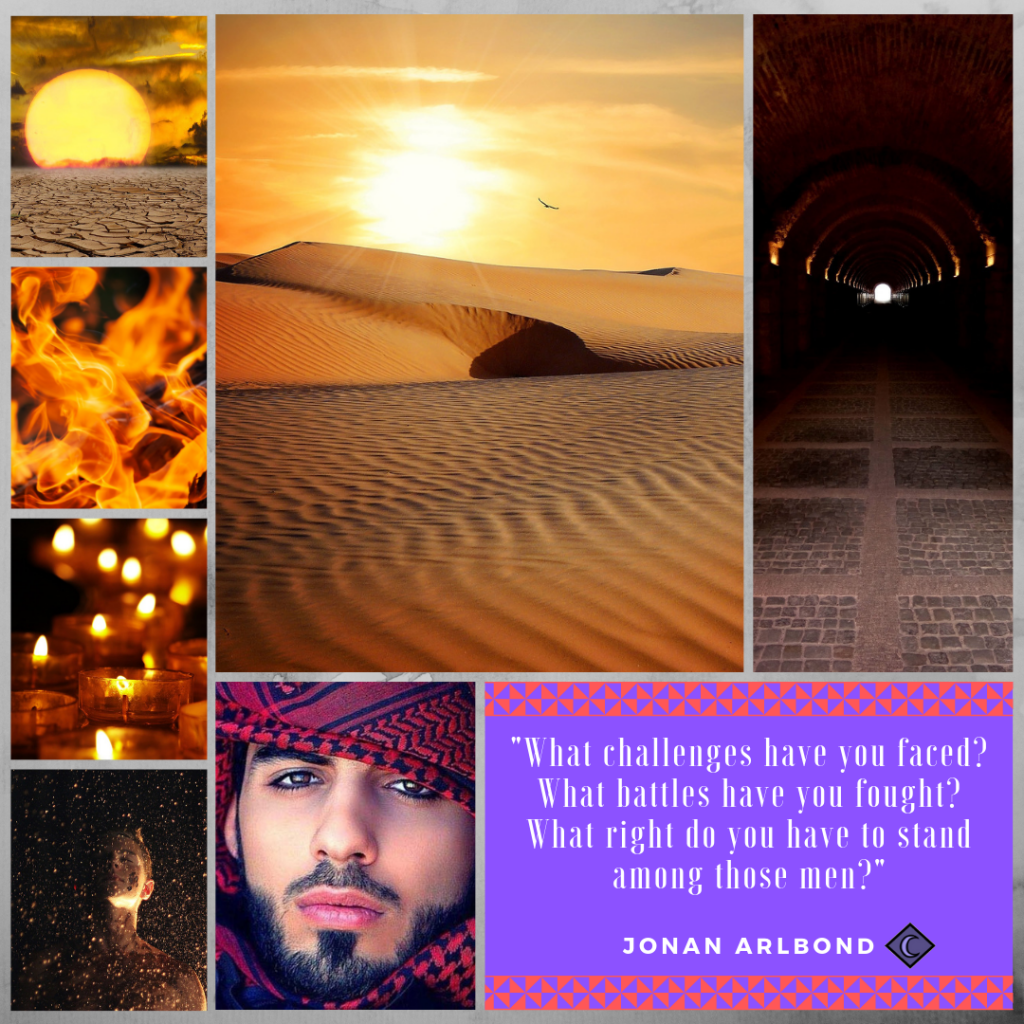 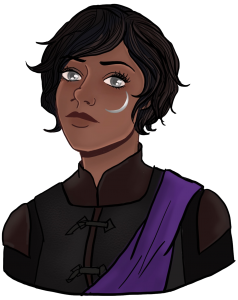 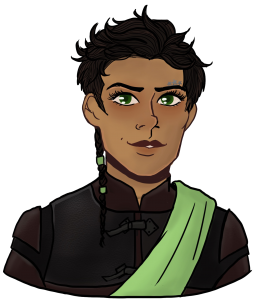 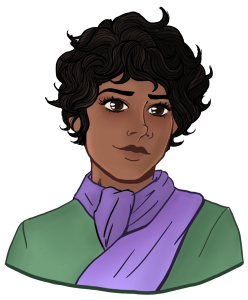 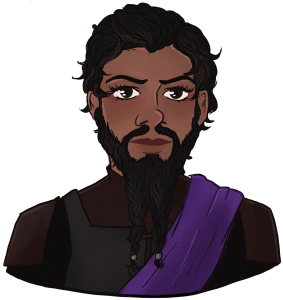 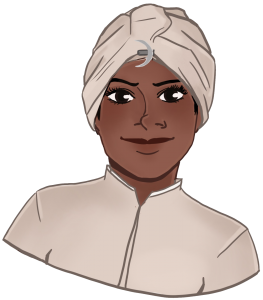 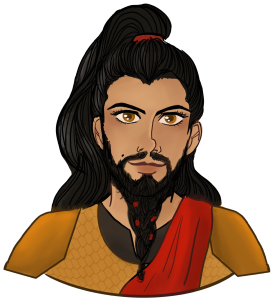 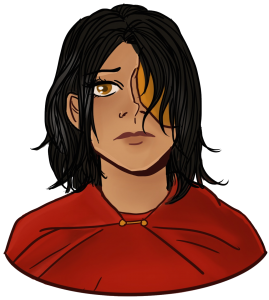 Appearance: Jonan is a Solander with bronze skin. He has dark hair and eyes, and chooses to wear his hair and beard in a similar style to Talin. He also dresses the same in dark leather and wears a purple sash across his shoulder to represent House Arlbond. There’s a thin scar down the left side of his cheek from war.

Home: Born in Solus but calls Arlent his home

Story Role: Initially seen as an antagonist to Mina, Jonan makes it clear he doesn’t like or trust Mina to begin with. He avoids directly speaking to her, but later he gives her advice and acts as a mentor.

Motivations: Jonan is loyal to House Arlbond, especially to Talin who he owes his life. Before House Arlbond, his only motivation was survival and this gave him a lot of resentment of Housemen which he still holds.

He initially views Mina as a spoiled brat in need of a wake-up call, but he comes to understand her role, and how important she is to Talin, and thus tries to help her in his own blunt way. He understands her desire for revenge and to prove herself in a way that Talin doesn’t, and so he steps back and allows her that opportunity.

Personality: Jonan has often been described by people who know him as difficult. He is a serious, stubborn, and aloof man who rarely smiles. He has a dark, if slightly cruel sense of humour, and is good at observing people’s weak spots and getting under their skin. Most people tend to avoid him because he is socially awkward and has no time for pleasantries, but this is partly because he finds it difficult to understand his emotions or express them. He dislikes small talk and can’t see the point in politeness, but life in House Arlbond has taught him to keep his tongue leashed around Housemen.

Those that truly know him understand there is a deep warmth buried underneath all that bitterness. Jonan is extremely loyal to his House and family and is willing to do whatever dirty work is necessary to protect them. Though he may struggle with affection, he does feel things strongly, but his methods for showing affection aren’t always welcome. Iman thinks of him as a grumpy puppy.

Quirks: Jonan is the serious stoic type that hides in the shadows and glares at anyone who gets too close. He’s a man of few words and rarely speaks unless asked. He dislikes loud people, including children and Neu Bosan, with a few exceptions.

Abilities: Jonan is an adept fighter who is second to Talin when it comes to Solaran duelling, as the two have trained together as partners for years. However, Talin never taught him to dance, and out of respect for Talin, Jonan didn’t learn it. He can be a scrappy fighter and fight dirty when the situation calls for it.

He also has an incredibly powerful ability which is a secret!

Jonan loves horses (they’re better than people!) and is a trained hostler with a natural talent and interest in horse rearing and caring. As such, he’s a great rider and takes care of House Arlbond’s horses in his spare time.

Secrets: Jonan has many devastating secrets. You’ll need to read Sand Dancer to discover them!

Family: Jonan never knew his family when he was a child, but you’ll need to read Sand Dancer to learn more!

Favourite Place: The stables in Arlent

Jonan’s tale is his to tell. You’ll need to read Sand Dancer to learn more of Jonan’s history as it contains major spoilers!