It’s Halloween! You know what this means? It’s time to get spooky and remember that National Novel Writing Month also starts tomorrow! THE HORROR.

It also means the clocks have gone back, at least they have in the UK, so the mornings are colder, the nights darker, and we’re getting pretty close to Christmas. Where has this year gone? Oh that’s right, it got swallowed up by a pandemic.

Well, there’s plenty of books to read if, like me, you’re still stuck inside on lockdown. It’s not all so scary. Hang in there!

What I’ve Been Writing

This month I have been planning out my next series! I’m still waiting on edits for Fire Walker and decided to take a break from the series to focus on something new. I’m planning on starting my new project for NaNoWriMo starting tomorrow (EEK!) which means I’ve spent most of October (Or Preptober as the cool NaNo kids call it) building a whole new world, or several as it happens, and also whipping up new characters for a whole new adventure. On NaNoWriMo Eve I had just finished the final touches to my outline and was planning on spending the rest of Halloween relaxing, but then I had an idea that I’m still working through, so thank the gods NaNo starts on a Sunday this year so I can finish working out what this story is before I write it.

I’m calling it The Cruel Gods as it’s based around many different gods – most of them jerks – and a main character who wants rid of ’em. It’s my first foray into Urban Fantasy and it’s got a completely different world and vibe to Sand Dancer. I’m excited to dive in! Just as soon as I finish this outline…

What I’ve Been Reading

As well as planning my new project, I’ve been catching up on my reading and wow! Have I read some absolutely amazing books! I started the month finally reading Empire of Sand by Tasha Suri which I greatly recommend if you love desert-based worlds, especially those inspired by Indian mythology. 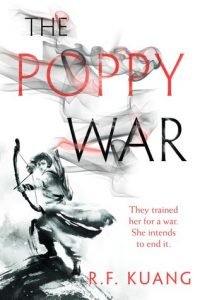 And then I completely fell in love with The Poppy War,  award-winning adult fantasy by R.F. Kuang. This one had been sitting on my TBR for a while and I wasn’t sure it was going to be my cup of tea because stories of war usually aren’t my thing, but I am so glad I decided to finally delve in. I was hooked immediately and yes, the main character of Rin reminded me of my own main character of Mina from Sand Dancer! Headstrong, hot-headed, sword-dancing, fire-summoning reckless girl with anger management issues? That sounds like Mina!

Seriously, I devoured The Poppy War and went straight onto the sequel, The Dragon Republic, which was even more amazing if only because I love the characters so much. The third and final book, The Burning God, comes out in a few weeks time and I am NOT READY.

I can already see my NaNoWriMo month struggling because there is no way I will wait to read this book. If you love adult fantasy I would really recommend this series, but bear in mind it does contain a lot of violence.

What I’ve Been Playing

For a while I had been obsessed with Skyrim but I think I’ve finally wrung that out of my system. Whilst prepping for NaNoWriMo and catching up on my reading, I haven’t actually played any games, but that’s how it goes sometimes! I’ve been doing a lot of overtime at work as well which certainly cuts into gaming time.

With NaNoWriMo about to begin, I doubt I’ll get much time in November for play! But that’s fine, because I absolutely love working on new projects. I’m a happy bunny.

So that’s been my October and I’m expecting my November to be heckin’ busy. And possibly stressful. Writing a whole new book is no easy feat, but it’s worth it.

Anyone else taking part in NaNoWriMo?

5 YA Books This November