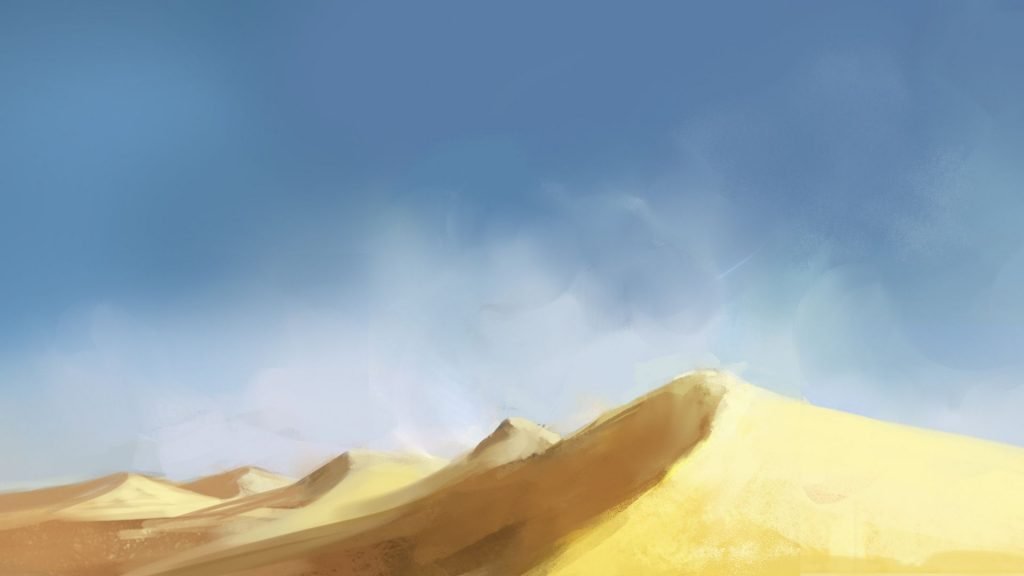 Sandarians are a proud, charismatic, and passionate race who once ascended from nomadic tribes. All Sandarians have fire in their blood which, in some cases, can be summoned as actual flame. However, due to atrocities in Sandair’s past, the use of fire magic is strictly forbidden, and those with the ability to cast it are known as Fire Walkers and sentenced to a life of imprisonment… or death. 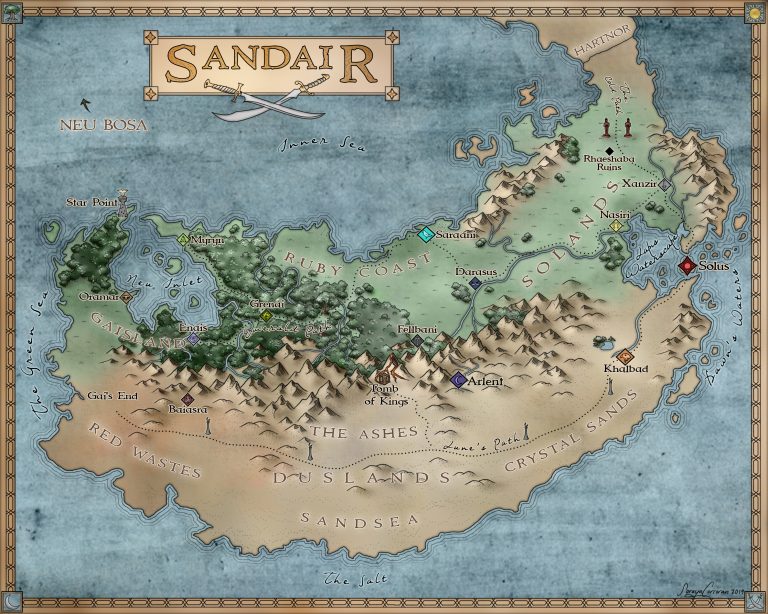 (Click to view a full-size image of Sandair’s map)

The Regions of Sandair

The three regions of Sandair are split between large mountains, the greater forests of Gaisland, and the southern desert. Though all three regions speak the same language and obey the same laws, they all have their own culture.

The northernmost region of Sandair, the Solands are home to the capital city of Solus, and it borders the northern kingdom of Hartnor via a stretch of ruined land known as the Cold Path. The vast plains are ideal for horse rearing and training.

The Solands are full of wide open plains and rugged mountainous land. The climate is warm, though not as dry as the Duslands.

The people of the Solands are known as Solanders, and are a hot-headed bunch who believe in Sandarian strength and ability above all else. The largest noble Houses exist here, including the royal family of Sandair; the Bright Solara. 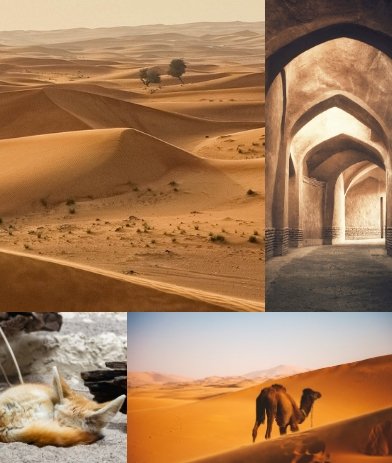 The southernmost region and the largest. The great deserts of the Duslands are kept at bay only by mountains and the sea. There are different varieties of desert, including the Red Wastes, the grey Ashes, the beige Crystal Sands, and the lawless Sandsea.

As the Duslands are ripe with tribesmen and raiders, most travellers must take the fabled Lune’s Path when traversing the desert. The Duslands is home to the Tomb of Kings, the birthplace of all Sandarians.

The people of the Duslands are known as Duslanders, and are a traditional, stoic lot. They’re also known to be the best warriors in the land. Ancient tribes still exist within the Sandsea but they act outside of the king’s law. 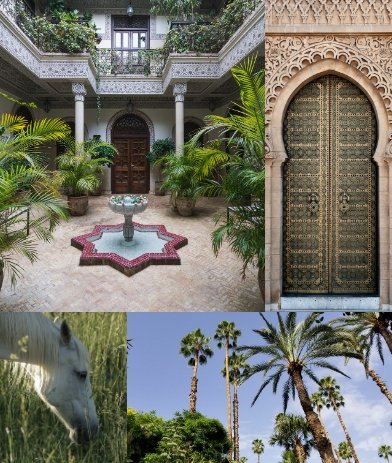 The westernmost region of Sandair, Gaisland is famous for the Emerald Forest, the largest forest in all Sandair, and a large fig tree known as the Tree of Gai. Gaisland also boasts the largest Neu Bosan population.

Due to its lush forests and farmland, the majority of Sandair’s food is exported from here. The climate is more humid and tropical than the rest of Sandair.

The people of Gaisland are known as Gaislanders, and they favour the arts and learning over swinging a sword. As well as food, Gaisland also exports art, pottery, jewellery, and own the most popular vineyards.

Sandarians aren’t an overly religious people, but their rites, traditions, seasons, and celebrations are based on the three gods. 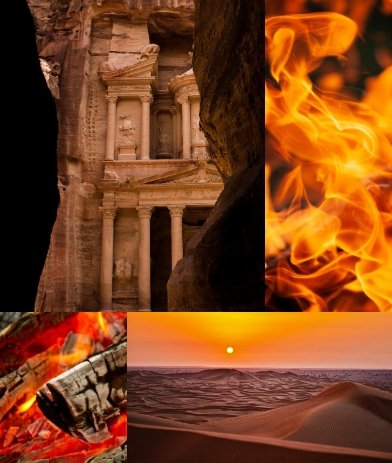 Rahn is known as the father of dawn, and he represents strength, battle, honour, blood, and fire. His visage is a bearded warrior. He rules his children with tough love – he does not desire worship, nor does he care for men who cannot care for themselves. He is a god of action and achievement.

The Temple of Rahn was once a grand academy to train fire magic, but now it has become a prison for those with fire in their blood. They are known as Fire Walkers. Only priests with absolute control of their abilities are allowed to leave the temple to perform duties such as lighting the town’s lanterns, leading blood bond ceremonies, and funeral rites. Fire Walkers are often called upon during times of war to use their power for Sandair.

Rahn’s season is the summer season, known as Rahn’s Dawn, which lasts half a year and begins with the annual Solaran Tournament and the Solend, the Sandarian end-of-year celebration. 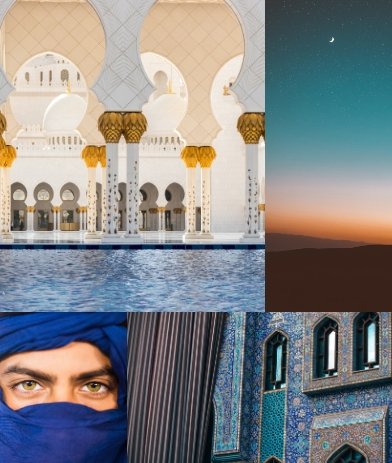 Lune is known as the mother of the night sky and she represents sensitivity, emotion, women, water, and the dead. She favours women above all, but is worshipped the most in the Duslands, where water is considered more sacred. Her visage is of a cloaked woman carrying a jug of water, or sometimes the moon and stars.

The Temple of Lune is home to Lune’s acolytes, the Water Bearers, who are all women – no men are allowed to serve. The temple manages the town’s water supply whilst doubling up as the town’s public baths. The Water Bearers also open their doors to Sandair’s abused and widowed women, providing them shelter and support.

Lune’s season is the rainy season, known as Lune’s Shadow, which lasts the shortest at around two-three months. Lune’s Shadow is considered holy in the Duslands, where acolytes collect water for the seasons to come and wash away their sins of the past year. 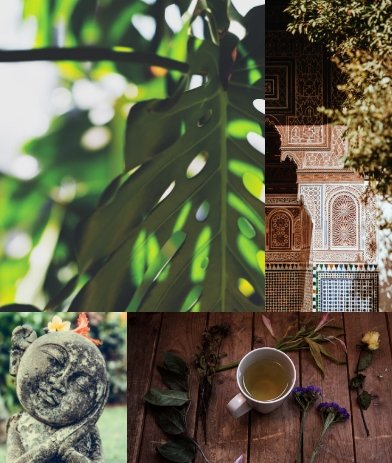 Gai is known as the child of Rahn and Lune, and is depicted as either male or female, but most often female. Gai represents healing, nature, fertility, harvests, love, and children.

The Temple of Gai is home to the Green Hands – the healers of Sandair. These are highly trained men or women who study the healing arts and offer their services to all Sandarian. The temple acts as a hospital for most towns, though some noble Houses employ their own personal Green Hand. The temple also doubles up as an orphanage for stray children and raises them to become future Green Hands. Though most Green Hands are common folk, some noblemen feel a calling and serve. Some Green Hands are taught combat skills so they can aid in times of war.

Gai’s season is the sowing and harvest season, known as Gai’s Seed, and is a popular time for love and marriage due to the temperate weather.

Sandarians are a proud, extroverted people that rise to any challenge, though each region have their own quirks; the Solanders are hot-headed and arrogant, the Gaislanders are laidback and artistic, and the Duslanders are traditional and peaceful.

Sandarians were born from the Dusland tribes and slowly migrated north to become the modern Solander and Gaislander. Because of this, many of Sandair’s customs and rituals came from tribal roots. Though the tribes have been slowly dying out a few still remain within the Sandsea, but rarely approach people or towns.

Sandarian men take pride in their military strength and all men learn the way of the sword – a man without his sword is marked as a criminal. They have a strong cavalry and favour weapons such as sabres, scimitars, and javelins. They are expert horse breeders, but are terrible at sea and depend on their Neu Bosan allies for ship trade and naval defence.

It is Sandarian women who mostly run the temples and trades of each town.

Sandarian towns are ruled by a House; a noble family who are bound together by blood bonds, and who owe their oaths to Sandair’s royal family. The people of Sandair pay their taxes to their House in exchange for shelter, work, and protection, and the Houses pay taxes to the crown in turn. Houses have their own speciality or trade which they employ their people for, such as farming or mining.

Sandair is ruled by the Bright Solara; Rahn’s chosen bloodline who reside in the capital city of Solus. The king employs a warden to watch over all three regions in his name: the Sword of Solus in the Solands, the Protector of the Path in the Duslands, and the Guardian of Gai in Gaisland.

Though Sandarian society is split between common folk and those of noble blood within the Houses, it is possible for those without noble blood to perform the necessary blood bonds to join a House and rise in society.

Noble Houses are bound by a set of rules known as the Code of Honor. The code states that each House must compete within the annual Solaran tournament each year to prove their honour and strength. Failure to do so could result in their House being sacked – destroyed.

Blood bonds and rituals are important in Sandarian culture. There are three types of blood bond:

Blood bonds are performed by the Fire Walkers from the town’s local Temple of Rahn. When a boy comes of age, they will perform a test of bravery known as a helbond before they can be allowed to take the bondrite and join a House. Women come of age when they bleed, but are not legally allowed to marry until aged sixteen. Girls don’t often join their own House; instead, they wait until marriage and join their new husband’s House. Marriage is seen as a way to foster relationships between Houses, and a daughter may be wed to one House in exchange for a son to serve as a sorran.

When it comes to marriage bonds, the bond doesn’t differentiate between gender, so same-sex bonding can happen. However, the bond will reject partners who are too close in bloodline. Thus it is important for Houses to arrange marriages with each other.

Sandarians can be quite flamboyant and take any excuse for a celebration. They’re loud and love to eat and drink, and enjoy physical exercise, from horse riding to hunting to swimming. Due to the hot climate, many Sandarian take the afternoon off to rest and relax, especially in the Duslands.

Sandarian fashion comes in many forms, but noble Houses wear their own House colours; for men, this is a sash across their shoulder known as a sahn. For women, it is extravagant dresses and jewellery.

Though Sandair is ruled by the three gods, most Sandarian are not overly religious and don’t feel the need to worship their gods outside of specific holy days. The Sandarian gods value practicality, which is why Lune offers her temple as public baths, and Gai offers their temple as a hospital for the ill or needy.

Sandarian’s believe that the sun is Rahn, and the moon is Lune. They believe that their spirit returns to Rahn at death but only if a body is burned. Sandarian funerals are known as a lurrite. As Lune is the goddess of shadow, mourners wear blue in respect of the dead.

Many also believe that if a body is not burned and sent to Rahn at death, it will haunt the desert as creature known as a sand wraith. Though these are rare…

Sand itself is an important part of Sandarian culture, as traditionally, the ashes of the dead are returned to the desert. Duslanders believe the desert is made up of Sandair’s ancestors, and lends to the phrase; the sands travel with you.

In Sandair, fire magic, known as blood fire, is banned from use. Those who summon fire magic are labelled as Fire Walkers and are banished to the Temple of Rahn where they must learn to control their power for the good of the kingdom. Those who refuse to submit and enter the temple willingly are considered dangerous and are put to death under the king’s law.

For hundreds of years, the people of Sandair have feared Fire Walkers and rely on the Houses to keep them locked away and under control. Children grow up believing that Fire Walkers are monsters, and they are taught the tale of the Fire Walkers who once murdered the king’s family and set alight the city of Solus.

By law, Fire Walkers are not allowed to wear clothes, and must have their head, facial hair, and body hair shaved. They are also marked with red tattoos traditionally in the shape of swirling fire, though sometimes this design is personalised per Fire Walker. These markings are to ensure a Fire Walker cannot hide themselves from society.