Another month has flown by and we’re now well into Autumn! Or Fall if you’re not European. The nights are already getting darker, the leaves are starting to fall, and it’s getting cold enough to snuggle into a hoodie put the heating on. Who else loves this time of year?

What I’ve Been Writing

At the end of last month I finished writing a draft of Sand Dancer book three. This month? This month I wrote… nothing.

Well, okay, I have spent this month doing some edits, but mostly leaving book three alone so I can give it enough space for when I do come back to it with my editing hat on. I’ve also been writing up an outline for book four (yes they’ll be a book four!) and also doing outlines and world building for entirely new projects outside of the Sand Dancer world. I’ve had real trouble deciding what project to work on next as I have too many ideas…

For October, I will hopefully focussing on edits for book two and three of Sand Dancer. And then come National Novel Writing Month in November, I’ll be writing book four! Busy busy busy!

What I’ve Been Reading

I’ve been using my break to catch up on some reading. This month I’ve finished Leigh Bardugo’s King of Scars which continues on the Grishaverse. I’m almost caught up with my Bardugo reads and will be picking up Ninth House next. 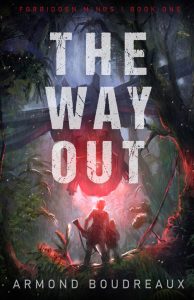 To shake things up a bit, I’ve taken a departure from my usual fantasy reads and read a sci-fi thriller from my fellow Uproar Book’s author, Armond Boudreaux; The Way Out. Check out the blurb:

A medical miracle is reshaping the world. The artificial womb ensures the perfect health and flawless development of every unborn child. Natural pregnancy is now unnecessary risk—and quickly criminalized as a danger to both mother and fetus.

As a reporter, Jessica Brantley makes new enemies on a daily basis covering both sides of the controversial new law. Her search for the truth behind this world-changing technology leads to an unimaginable discovery—the existence of children with terrifying telepathic powers.

This truth is no secret to former U.S. Marine Valerie Hara. Her illegally born eleven-year-old son can’t help but hear the thoughts of everyone around him. When government agents storm her home to take her child away, she’ll stop at nothing to protect her family.

Soon, these two fearless women will be branded as terrorists, hunted by the military, demonized by the media—and drawn into a desperate fight for the freedom of the human race.

If this sounds like your jam, The Way Out will be available to buy on ebook and paperback soon! I really enjoyed the twists and turns and how Boudreaux created a future world that seems hauntingly plausible.

What I’ve Been Playing

I’ve been playing an embarrassing amount of Skyrim this month. Writers need a break, yanno? You may have worked out that I am a massive Skyrim fan. In fact, I’m going to load it up right after I’ve finished this blog post. For a while I couldn’t settle into a character type that I liked, but with some awesome mods, I’m now playing as a time lost Dwemer and having an absolute blast.

I’m sure I’ll get bored of it eventually. Around the time Cyberpunk comes out…

I’m expecting a busy month of editing in October just in time for Halloween. How about you?

Why I Hate Writing Advice