Please use this page for whatever resources you may need for Trudie Skies and her books. This will be updated whenever a new book is released. Need more information? Contact her and she’ll be happy to assist.

Trudie Skies has been living inside fantasy worlds ever since she discovered that reality doesn’t quite live up to the hype. Through the magic of books, she wishes to share these worlds of hope and heroes with other weary souls. Living in North East England, Trudie spends most of her free time daydreaming about clouds, devouring whatever fantasy books or video games she can get her hands on, and chasing after her troublesome dogs, who would like to reassure you they are very good boys.

Her debut YA fantasy series, Sand Dancer, was published through Uproar Books. Trudie is now writing adult gaslamp fantasy with her new series, The Cruel Gods.

You can chat with Trudie on Twitter @TrudieSkies, or to find out more about Trudie and her fantasy worlds, visit www.TrudieSkies.com

Trudie’s pronouns are she/her or they/them. 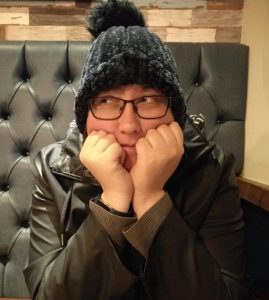 You can find Trudie on the following:

Book One: The Thirteenth Hour 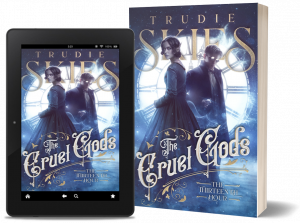 When the saints fail, the sinners step up.

When the saints fail, the sinners step up.
Cruel gods rule the steam-powered city of Chime, demanding worship and tribute from their mortal subjects. Kayl lost her faith in them long ago, and now seeks to protect vulnerable and downtrodden mortals from their gods’ whims. But when Kayl discovers powers that she didn’t know she had—and destroys a mortal’s soul by accident—she becomes Chime’s most wanted.
Quen’s job was to pursue sinners, until the visions started. Haunted by foreboding images of his beloved city’s destruction, Quen hunts soul-sucking creatures made of aether who prey on its citizens—and Kayl is his number one target.
To ensure Chime’s future, Kayl and Quen must discover the truth of Kayl’s divine abilities before the gods take matters into their own hands.
For a city that bows to cruel gods, it’ll take godless heathens to save it.

When the saints fail, the sinners step up.
Cruel gods rule the steam-powered city of Chime and demand worship from their mortal subjects, but when soul-sucking creatures prey on Chime’s citizens, it’ll take godless heathens to save them—before the gods take matters into their own hands. 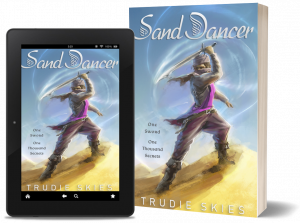 One sword. One thousand secrets.

Only monsters summon fire by magic. It’s a sin against the sun god and a crime against the king. The punishment is death.

But when sixteen-year-old Mina discovers fire magic runs in her family’s blood, it’s just the beginning of the secrets her father has been keeping from her. When her father is murdered, this half-starved peasant girl finds herself on the run—pursued across the desert by the soldiers and guards of the noble Houses. To survive, she knows she’ll have to abandon her past and learn the way of the sword. But only boys are allowed to carry a blade. There’s only one solution…

Disguised as a young nobleman, Mina must make a new life for herself in the heart of her enemies. But she knows she can’t keep up the masquerade forever. With time running out, which will she choose to find—the truth or revenge?

When her father’s murder reveals a lifetime of lies, a half-starved peasant girl must disguise herself as a young nobleman if she hopes to make her way into the heart of her enemies. But what is she truly after—the truth or revenge? 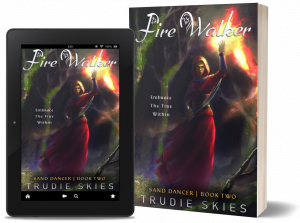 Embrace the Fire Within.

When her kingdom starts rounding up anyone with fire magic to fight and die on the front lines of a pointless war, a brash young warrior must decide how much is too much for her people to give up in order to stop the violence.