With just days to go until the release of my next book, The Thirteenth Hour, I’m super excited for you to enter the steam-powered city of Chime and discover the domains of the gods! But if you’re not quite as excited as I, then allow me to charm you with thirteen reasons why The Thirteenth Hour deserves a place on your TBR pile! The Thirteenth Hour is a gaslamp fantasy, but surprisingly, not many people seem to have heard of this growing genre! Gaslamp fantasy AKA gaslight fantasy is where steampunk meets magic. Often set in a Victorian, Edwardian, or Regency time period with gothic or dark fantasy influences, gaslamp fantasy is a subgenre of historical fantasy occasionally featuring steampunk technology alongside magic and other supernatural elements or races like the Fae. While The Thirteenth Hour is set inside its own secondary world, it is influenced by Edwardian aesthetics! The first main character of The Thirteenth Hour is Kayl, a flirty and playful character who is also a Vesper, a dark-elf inspired race that can summon and manipulate shadows. This makes it easy for her to sneak around and play spy. In a world where blasphemy and apostasy against the gods are crimes, Kayl considers herself to be a godless woman who lives a life of independence free from her god’s whims. In fact, as part of the Godless organisation of shadowy heathens, her goal is to help protect other mortals from the cruelties of the gods however she can.

As the story unfolds, we’ll learn that Kayl has some rather unique magical abilities which could destroy the balance of the gods… Quentin AKA Quen is the secondary main character of The Thirteenth Hour, and the story is told through his and Kayl’s eyes. Quen is a Diviner, a race of mortals who can manipulate time. Not only can he pause and rewind time, but with a single touch, he can see the past and future of other mortals, though his gift is twisted – the first thing he sees is a mortal’s death! With his unique abilities, Quen is a member of the Wardens, the police force of Chime who serve as the gods’ mortal eyes. Quen is my favorite character, as he’s charming and also grumpy at times. He loves his tea and biscuits, but has little good to say about coffee!

He’s tasked with hunting down sinners like the Godless, though he’s soon ordered to discover the mystery behind soul-sucking aether creatures…

4. The Twelve Domains of the Gods

The world of The Thirteenth Hour is split between twelve domains ruled by twelve almighty gods. As the book series name hints, these gods are largely cruel, and they have complete control over their domains and the mortal races made in their image. As the series progresses, we’ll travel to each of the twelve domains and meet the gods!

Each domain is its own world or dimension separate from the others and can only be accessed by travelling to the main city of Chime via a magical portal known as the Gate. This Gate cycles through each domain at the turn of the hour like a clock, which means domains can only be accessed during their hour slot once per twelve hours. Gaze at the domain map below to see which domains correspond to which time: As mentioned above, there are twelve unique races within the world of The Thirteenth Hour, each made in the image of their god! These mortals vary in size, shape, and temperament, and each come with their own unique magical powers. The red-skinned Ember can summon flame, for example, whereas the bird-like Zephyr possesses an aptitude for flight and technology. These twelve races coexist within the city of Chime, or are meant to – not all of them get along!

6. The Steampunk City of Chime Chime is the main city in The Thirteenth Hour; a mortal city where the gods cannot tread. Here, the twelve domains live out their mortal existence according to the sacred Covenant between mortals and gods. While they have been granted free will to live as they wish, each mortal is expected to pray and worship their god, and their behaviour is monitored by the Wardens, Chime’s own police force.

Chime is an Edwardian-inspired city made from brick and brass. Steampunk technology and aether magic power the street lamps, the trams, and the magical Gate! Chime itself is built on multiple layers shaped like an hourglass with an upper city home to Chime’s richest, and a dark Undercity home to the poorest. A giant clock tower sat atop the Gate connect the two layers together, and these can be accessed via giant steam-powered elevators that run up and down the clock tower! As an Edwardian-inspired world, you can be rest assured that The Thirteenth Hour is full of obnoxious Britishisms and references including copious amounts of tea drinking, descriptions of biscuits and other British snacks, characters queuing for the trams and elevators, Quen slapping his thighs when he’s ready to leave, and, uh, a delightful selection of British swear words including my favourite: arse.

Sadly, this book is written using US spelling and grammar, but the British flavor is there and will only ramp up as the series goes on!

8. The Mystery of the Aether Creatures The story of The Thirteenth Hour resolves around the mystery of soul-sucking creatures made of aether that have been stalking Chime’s citizens. As a Warden, Quen has been ordered to investigate, and his primary suspect is Kayl – a woman who learns she has the ability to steal souls with powers she didn’t know she had!

Kayl and Quen will need to team up and discover the source of her strange powers in order to discover just what the aether creatures are, and why they’re attacking mortals. The Thirteenth Hour is also the tale of godless heathens standing up against the gods. Kayl is a member of the Godless, an organisation that refuses to worship their gods and who act to protect other mortals from the gods’ cruelties. Though the gods do not interfere directly with Chime, they continue to rule over their mortal subjects through the eyes of the Wardens. Blasphemy and apostasy are the greatest sins, and denying one’s god could mean being incarcerated by the Wardens or exile from Chime altogether.

The gods make many demands of their mortals, including tributes and tithes, which some mortals may struggle to pay. Failure to do so can result in punishment!

Throughout the series, we’ll learn more about the gods and their mysterious ways, but don’t mistake me: this story is very much an “attack and dethrone god” Final Fantasy-style god-destroying extravaganza! The Godless are a shadowy group of seven mortals across the various domains, including Kayl. Each has suffered at the hands of their gods, and it’s this shared experience which has brought them together with a single purpose – to undermine the gods and their Wardens! Kayl considers the rest of the Godless to be her family, and during their down time they like to drink wine and play their version of Cards Against Humanity where the most offensive answer to a series of questions wins! An Ember, the Hottest of the Lot!

The mortals of The Thirteenth Hour are mostly pansexual. Though some mortals are discouraged from dating outside of their domain, most can and do, and dating isn’t about whether genitals match but whether a Leander lion can comfortably bed a fishy Amnae! Both main characters of Kayl and Quen are pansexual, and there are various side characters, such as members of the Godless, across the LBGT+ spectrum, including asexual and lesbian/gay characters. As the series goes on, we’ll also meet non-binary and trans characters too.

The city of Chime is a queernormative world, but inequality still exists between the domains. Of the twelve races in The Thirteenth Hour, the Mesmer have become a favourite! From the domain of Phantasy, the Mesmer are dreamers who often find reality confusing. They spend most of their time eating candy or sleeping, and they have the power to explore their own dreams as well as dreams belonging to other mortals. Sadly, they are often plagued with nightmares and visions!

Here’s where you meet them for the first time in The Thirteenth Hour:

A Mesmer sat in the corner staring at a decorative plate hanging from the wall, their head tilted, mouth ajar. They could have been contemplating the secrets of the universe or just admiring the pattern for all I knew. The Mesmer were dreamers who often fell asleep into their cups. Good customer service meant making sure they woke in time for their crossing at the eleventh hour.

I whipped out my notepad. “May I take your order?” The Mesmer rarely held gender; thus, I skipped my usual honorific titles. This one wore a tight black suit and their skin was a dark purple to rival the Vesper, only their skin rippled with the patterns of a nebulous star.

“Would you like something caffeinated?” I prompted again. Mesmer liked sweet things. Candy, cakes. “We also serve fruit teas.”

The Mesmer slowly lowered their gaze and stared with fathomless black eyes speckled with starlight. “Tea.” I wasn’t sure if that was a proclamation or a question. “Is that why we’re here?”

My Glimmer boss scowled at me from across the room as she chatted with another customer.

“I’ll tell you what, I’ll get you something that’ll perk you right up. The crossing to Phantasy is opening shortly.”

“The Gate,” the Mesmer murmured. “Is that why we’re here?” 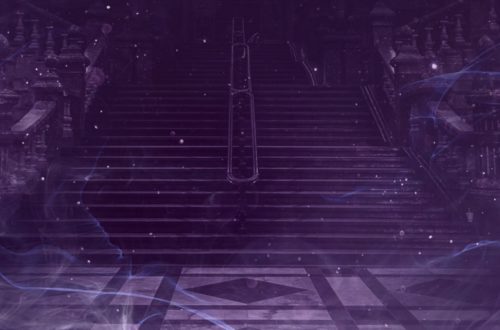 Announcing The Children of Chaos and Cover Reveal
July 13, 2022 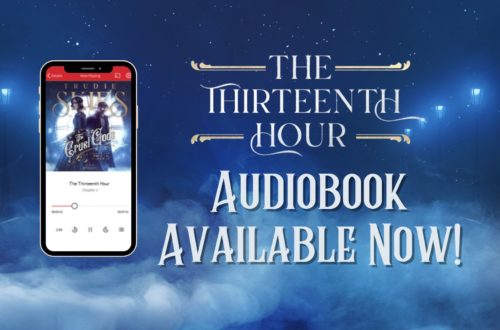 The Thirteenth Hour Audiobook is Out Now!
July 2, 2022